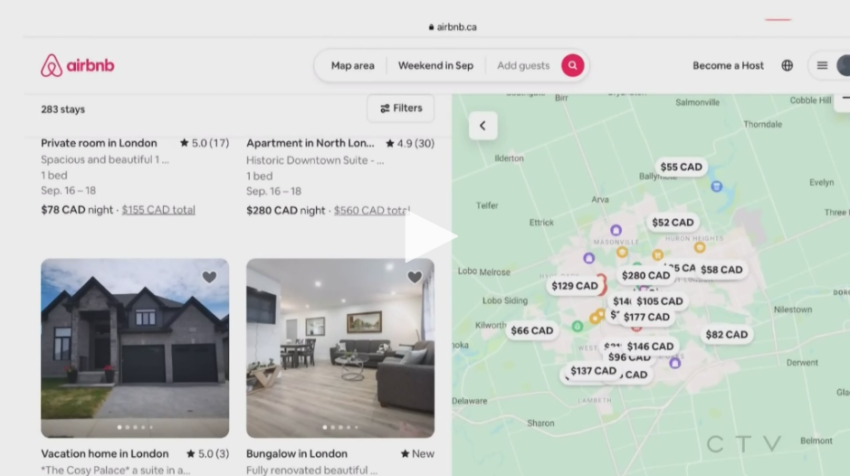 London’s decision to license Airbnb, Vrbo, and other short-term rentals has already had a chilling effect on the industry.

“We’ve made the decision to close our business, sell other portions of our business off,” says Adam Wayland as he packs his belongings in preparation to sell his home in east London, Ont.

Wayland says after nine years offering short-term accommodation at a number of local properties, the new rules being implemented this fall have forced his hand.

In October, city hall will start accepting applications to license Airbnb, Vrbo, and other short-term rentals.

Hosts must charge the four per cent hotel tax, submit to inspections and only rent space on their principal residential property.

By closing the door to out-of-town hosts and multi-unit hosts, some city councillors expressed hope earlier this summer that it would help address the housing crisis and reduce neighbourhood nuisances like noise.

However, Wayland does not believe council’s decision is returning many housing units to the market.

Debra Rigby is worried that there may be loopholes in the licencing rules, telling CTV News London, “I have some concerns that people are going to try to skirt around this somehow.”

Wayland says some hosts are considering a move underground to the unregulated short-term rental market.

“You see it in Toronto. The Kijiji, Craigslist, Facebook ads. Hosts saying ‘tell them you are related to me,’” he says.

City hall warns that operating an unlicensed short-term accommodation will result in a fine of $500 per day — jumping to $1,000 per day for repeat violations.